Get to Know: Brad Seamon 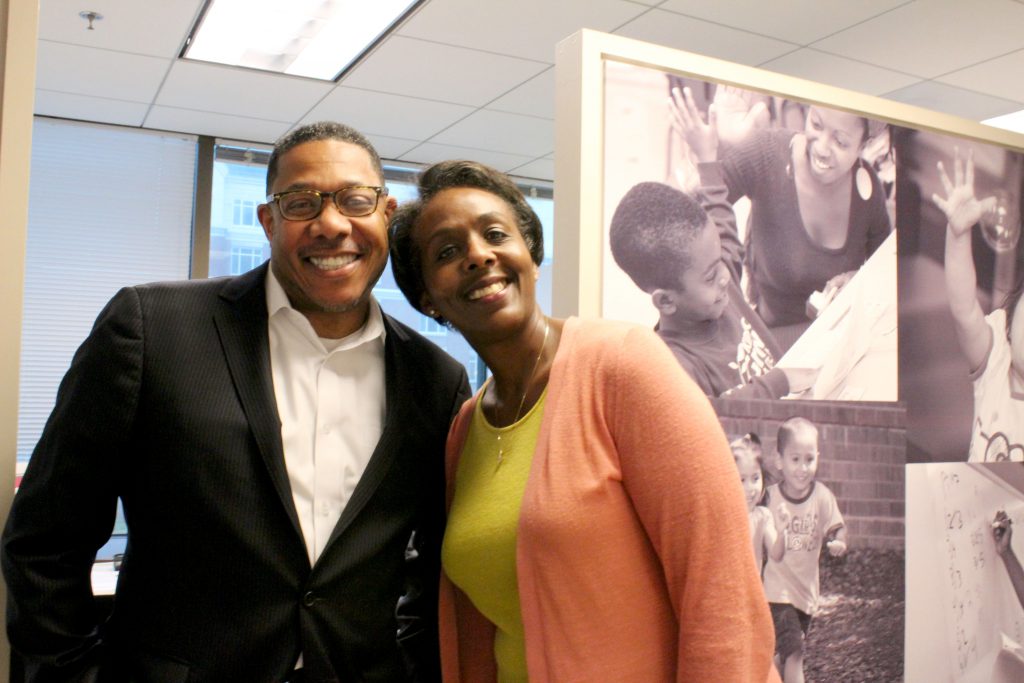 We sat down with VPP Board Member Brad Seamon recently to hear about the lessons and insights he’s learned from working across the private, government and social change sectors along with the defining experiences that shaped his life and outlook on philanthropy.

What were the things, ideas or people you encountered in your life that shaped your career and who you are today?
My experiences in college played a huge role in shaping who I am today. I came to Washington, DC to go to Howard University. Both of my parents went to Howard and graduated in the early ‘50s. They both passed away when I was in college.

When my mother got sick, I sat in the hospital room and watched her take her last breath. It was like something came over me. It was time to stop fooling around. That next year, I got 4.0s my last two semesters. I was an accounting major and had dropped back to the class below me. I was a “fifth-year guy” but I was the only one in my class to pass the Certified Public Accountant (CPA) exam the first time. It gave me a real sense of confidence and a sense of what it meant to be resilient.

Another influence has been my two sons. When they were young, I coached little league basketball. I was at every practice. so eventually their coach asked me to coach with him. He and I were diametrically opposed as to the way you coach kids that age. We would go in the back room and have heated discussions. He was willing to listen, but he was the coach. If he didn’t want to change then we did it his way.

I learned early on that when you have a team—whether it’s corporate, nonprofit, in a church, community group, whatever—you need to listen to people and get their input. If they’re heard, they’re more likely to fall in even if it’s not exactly what they want. The other lesson is to always leave the disagreements in the back room.

My experiences with respect to coaching kids helped me realize how much I liked coaching and teaching. The resilience of being able to come back after the loss of my parents and to pass the CPA exam the first time gave me confidence. If you feel good about yourself, you bring good things to you.

How did you and your wife [Malitta Seamon] decide to focus your corporation on building stronger, healthier and safer communities?
Seamon Corporation supports governments, nonprofits and communities in efforts to increase health equity, improve health literacy and enhance health policies. Early on, we were consulting a lot for the National Institutes of Health on the impact of alcohol abuse and mental health issues. We expanded into several safety net agencies, so we were fortunate to be involved in several important health and safety outreach efforts. One experience in particular that increased our awareness and commitment to closing gaps and disparities was our support of the National Health Service Corps, the federal agency that places doctors, dentists and nurses in medically underserved areas across the country. For more than a decade, our company delivered all of their training conferences and served as a communication hub for clinicians out in the field. We learned about federally qualified health centers and the need to provide care in communities that are under-resourced as well as communities of people hardest to reach.

After President Obama got elected and his administration began to build up the new health care law, there was a need to increase the ranks of the clinicians serving in these community health centers because of the anticipated number of additional Medicaid beneficiaries. Our company participated in that build-up and that expanded our knowledge and awareness about all the obvious and less obvious factors that influence health outcomes for kids and families: through the whole safety net piece.

You took a leave from your life as a successful executive in the private sector to serve as Chief Administrative Officer of Prince George’s County, Maryland – Why did you do that and what lessons did you learn from your time in local government?
I had worked with Rushern Baker in the past – when he ran for his first state legislature position, he asked me to be his campaign treasurer and I served in that capacity for 16 years. When he was elected County Executive of Prince George’s County, MD, he asked me to come help him again in the county government, and I felt compelled to serve the community this way.

It was a transition.

The month after County Executive Baker took office, there was a spike in homicides in Prince George’s County – 14 homicides in 16 days right at the beginning of January, when it’s cold. Usually these types of rates go up when it’s warm. Everybody was looking around and saying, “If this is happening now, what’s going to happen in the summer?”

So the County Executive got together with the police chief, and we started regular weekly meetings and crime briefings. The police department came up with a summer crime initiative and identified all the repeat, violent offenders in the neighborhoods. The department made a heat map of where the offenders were. The department knew where they lived and said to these offenders, “We’re going to have a meeting in the community center in our area, and you would probably want to show up.”

The police came to the community center. On one side of the room, they had people that offenders usually deal with: parole, probation, state’s attorney’s office, police department.

We looked at that and said, “Why can’t we do the same thing? Use data and identify where our biggest issues are in the county?” We already knew crime. But we could use this approach to address lack of access to healthcare, abandoned homes, trash, etc. Why don’t we identify the areas and then take the county’s resources and put them into those areas simultaneously? Typically, you have the police over here, the public works people over there, social services here—but what if we put them all in the same place at the same time, to try to deal with all of the issues? This program grew into the Transforming Neighborhoods Initiative.

After three and a half years, we achieved quite a lot. When County Executive Baker began his reelection campaign and it looked very successful, I felt like it was a good time for me to transition back to my own business.

What drew you to engage with VPP?
The philosophy and approach of Venture Philanthropy Partners were intriguing to me. This whole venture capital approach to evaluating nonprofits, the rigor with which VPP did it, the relationships they brought to the table, the passion that VPP brought to the table—it made me feel good. And they are also focused on kids, the social determinants of health – the types of things that I am interested in.

What value does VPP bring to the region?
VPP brings a business-like approach to social good in the community but the return isn’t dollars: It’s the number of kids served or the number of disconnected youth that are reconnected. It’s an important skill set.

Understanding business and financial statements has helped me through my career. I understand profit and loss: It’s just that what you’re counting is different. I appreciate that VPP brings this strategic thinking to a sector which hasn’t always been known for being focused on these types of things.

How do you use your experiences in government, business and the nonprofit sector as a lens for your role as a member of VPP’s board?
This quote is relevant to VPP: “Where work, commitment and pleasure all come together and we reach that deep well where passion lives, nothing’s impossible.” VPP brings passion to the table. When you do this kind of work, oftentimes the grants don’t necessarily have a lot of profit in them. You’re just trying to cover cost and services. You aren’t doing it because you’re going to get rich. You can’t sell stock later on. You’ve got to be fueled by something else. I think the people here and the people who are involved with VPP bring a level of passion that’s admirable.

Going forward, it’s critical that we continue to listen to and understand what the community wants and needs. As the County learned with the Transforming Neighborhoods Initiative, when you go to the community giving them what you think they need and you haven’t asked them what they think they need, it’s a tough sell. If you gather information and have an informed solution then take that back to the community, or if you involve the community in the development of what the solutions are, it’s a much smarter and more effective way of trying to solve community-based issues. That’s how VPP works and why I think it has such an important impact in the region.

What’s the benefit of investing in VPP as opposed to directly going to the nonprofit?
If you make direct investments into nonprofits that are delivering services, oftentimes, you don’t necessarily know what’s going on until it’s too late. Sometimes, organizations can burn through the money and not achieve concrete results. There are many organizations and many people that want to make investments in nonprofits that want to deliver these services, and they don’t have the time, effort or expertise to monitor.

VPP stands in the breach: For a committed philanthropist, the most important thing is choosing good investments. VPP helps with the rigor of choosing an investment. Then they offer and help leadership to make the right decisions, focus on the right things, connect nonprofits with influencers. VPP’s network is wide, so they know a lot of people.

VPP helps with infrastructure that some nonprofits may or may not have. These investments are large and multi-year. They can move an organization from one level to another. It’s always that step up where you need additional resources and support to make sure you’re able to successfully go to the next level.

Looking ahead, what’s something that VPP is doing that excites you?
I like how VPP is exploring new models and looking for ways to monetize the expertise that they’ve developed to do more good things in the community. Rather than just use its expertise to monitor the investments, VPP wants to use that expertise to help other nonprofit and collaborative leaders build and grow programs in the area of VPP’s expertise. I’m excited about that and the talk about impact investing.

Is there anything else you would like to add?
You can start with a $5 or $10 donation to support the future of a kid. I think that philanthropy really provides an opportunity for folks to give what they want to experience. So, by giving you can attract the good things that you want to see in our communities.

Probably one of the most important things that we can do for children is give them hope. If they have hope and they have positive feelings about their future, then that’s going to help them to actualize those feelings and live in positivity, because I believe you attract what you give off. If a child has negative feelings, thinks things are hopeless, and envisions that they might end up doing whatever on the street, that child could very well end up there.

That’s one of my loves about VPP: VPP gives young people hope.