Vulnerable children and youth in Greater Washington face an uphill battle when it comes to joining the workforce. When Year Up brought its national model of workforce development to the region, VPP invested in its growth. The practices they pioneered in Greater Washington have since become models for the rest of the nation.

Ronda Harris Thompson – National Director of Alumni Relations and Former Executive Director 2011-2015, Year Up – National Capital Region: I think we have some perceptions in our country about who is talented and where that talent comes from. Year Up is really helping to break down those perceptions by opening up a back door that allows people to get in who otherwise might not. Once they’re in the door, they can prove that they are just as talented if not, in some cases, better than folks that you would see coming from traditional pathways. Year Up connects these young people with skills training, mentoring, work experience, and job opportunities to realize their potential.

Carol Thompson Cole – President and CEO, VPP: Even before they came to the National Capitol Region, Year Up had a strong reputation for being one of the best nonprofits serving young people ages 18-24. When they arrived in the area, their former executive director, Tynesia Boyea Robinson, reached out to us and made a case for how difficult it is for people coming into the NCR to become connected. Since VPP is a connector, we realized that we could play a part in building and networking the strong program they had already created in this Region.

Ronda: I was around back then and one of the things that was really unique about VPP was how, even before investing, they did a very extensive due diligence process. We brought together national board members, local board members, and national staff members. We also brought in other community organizations in the local market that really understood what we were trying to do and the impact that Year Up was making. It was unlike anything I’d seen from an investor before.

Carol: On the VPP side, we were really impressed with the talent that they had in their local office. I think we were also impressed by the commitment that the organization had and how every member of that staff in some way was responsible for the young people being served and mentored. We saw a rigor, a focus, and a discipline in the organization.

Ronda: A lot of times, as a non-profit, you aren’t comfortable being vulnerable with your funders because you run the risk of them seeing your dirty laundry. VPP just had a very different approach. They wanted to see what was working well, but, more importantly, I think they were interested in what wasn’t working. That process allowed us to figure out the best possible investment for VPP and Year Up, to really get focused on what we wanted to do better in order to help us grow and flourish in this community.

Carol: One area that was particularly successful was in helping Year Up explore new internship avenues. We were really excited about the opportunity to open up the option for federal government jobs. Not only would this provide government jobs, but government contractors could potentially also follow the government’s lead by offering jobs as well. Thus making the amount of jobs available to these young people even bigger. We made the case that these are local young people and, if you get them in and they can have an opportunity to be promoted, you’ll have them as longer-term employees. That has proven to be the case.

Ronda: We can only serve as many young adults as there are internship opportunities. VPP’s investment allowed us to go through the process of getting on the GSA schedule to do business with federal government agencies. As a result of that, we had internships with NASA, the Department of Agriculture, and the Department of Commerce. It really opened up doors for us.

Carol: When you look across our investment in Year Up—in terms of building organizational capacity, diversifying funding, developing partnerships, and forming new models—there were a lot of innovations. We’ve helped Year Up demonstrate what young people can do if given the chance.

Year Up – National Capital Region provides young adults with full-time training in technical and professional skills culminating in six-month customized internships with corporate and government partners in the Region. 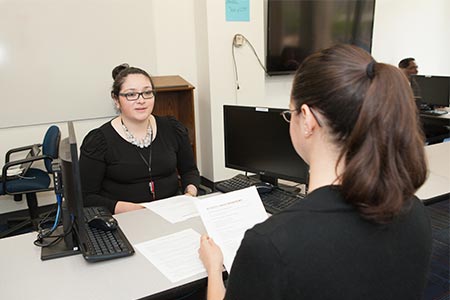 Young adults with a high school diploma or GED who are neither employed nor enrolled in higher education are nearly 15% of all 18- to 24-year-olds nationally, which is illustrative of an ever-deepening national opportunity divide. This is Year Up’s target population.

This successful direct service program in the National Capital Region has the credibility to influence policies and practices, including government and corporate hiring practices, and increase the site’s impact on thousands of young adults.

Since its founding, Year Up – National Capital Region has been committed to scaling the program to achieve measurable impact in the Region. Its specific aspirations were to:

VPP has helped Year Up strengthen its model, reach and influence in the region and nationwide. With VPP’s financial and strategic support, Year Up made and expanded important inroads with key local stakeholders, including the federal government. It is also developing strategies to expand, all while strengthening its current and graduated participants.

Capitalization/Revenue: Secured a $157,000 grant from the National Capital Region Transportation Planning Board and the U.S. Department of Education to subsidize 50% of the transportation costs for program participants.

Policy Influence: Shaped the national agenda by providing the Obama Administration with strategies for improving outcomes for youth who are neither enrolled in school nor have jobs. Student leadership, alumni and national business leaders have hosted annual meetings with key policymakers on Capitol Hill to discuss investing in the nation’s workforce. Year Up also holds critical leadership influence in national coalitions such as Opportunity Nation and America Forward.

Back to all investments